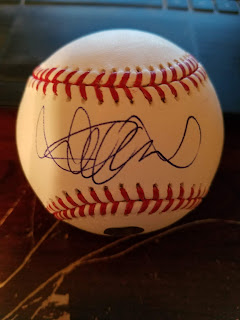 He's not a Hall of Famer, yet, but in five years, he will be.  I saw an amazing deal on a certified Ichiro baseball, and bundled it with the Chipper Jones that I picked up.  Ichiro routinely runs with a Sharpie and signs on the side panel of most baseballs, so getting a blue ink pen, sweet spot signed baseball at the price in which I got it was amazing.

Nice pick-up! I imagine Ichiro signatures will be harder and harder to find for an affordable price.

Congratulations on that sweet addition to your collection!