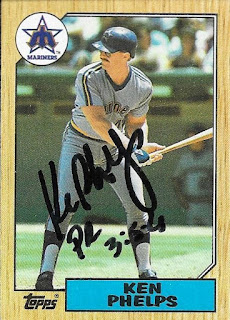 Here is another card for my 1987 set that I got back signed from Ken Phelps.  I was disappointed to see that Phelps will sign only one card, mainly because I had a stack of other Topps cards I wanted to send.  The 1987 was a priority, so I wanted to make sure it got done.