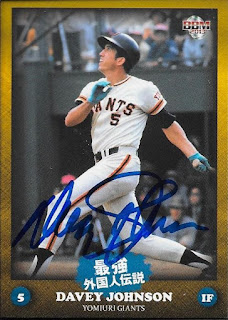 I added a really great TTM success to my collection with this return from Davey Johnson.  I was really glad that I got the above Japanese card signed, since I had gotten it from my friend, Ryan.

I also got these cards signed.  Of course, I had to get the 1987 Topps signed for the set, and I figured I would get the Mets leaders card signed.