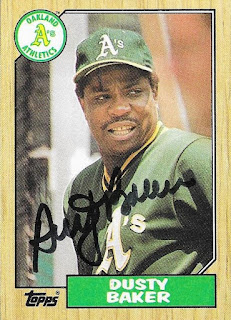 It took a couple tries, but I finally got an 87 Topps back from Dusty Baker.  I had sent to him a while back when he was managing the Nationals, but they never came in, then he was fired.  Finally, I saw some new successes from a new address, so I sent out just the 87, and here it is.