Another TTM Success From Dane Iorg 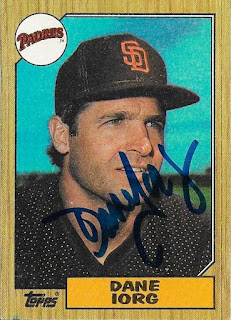 A while back, I finally was able to get a checklist online of the 1987 Topps set, and started keeping track of who I had, and who I needed.  I was really disappointed in the fact that I had maybe 20 or so guys that I had previously sent TTM to, but failed to send a 1987 Topps.  One of these guys was Dane Iorg.  Upon a second time through the mail, I was able to get Iorg on an 87, which turned out nicely.

I still have a good many guys that had previously been sent to, but I need to send again to knock out the '87s.  This set has definitely been some work.