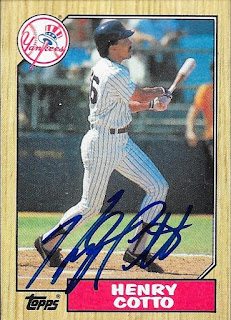 My friend, Jackson (not the one who went with me to Norfolk) goes by the Instagram name, Funinthesungraphs.  He recently moved from Chicago to the Phoenix area, and was able to get me a few autos during Spring Training, and thereafter.  One of the autos he got knocked a card off of my list for 1987 Topps, Henry Cotto. 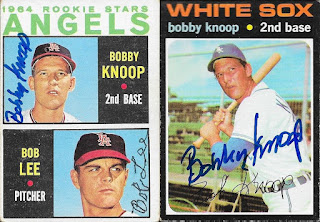 He also asked me to send him any Bobby Knoop that I found, and said he could complete the 1964 Topps Angels Rookie Stars that I had gotten signed by Bob Lee TTM.

He traded for my Japanese Dennis Sarfate that my good friend Ryan got me a while back.  Normally I wouldn't have let the Sarfate go, but Jackson has a Japanese card PC, and has met Sarfate several times.  I figured it would be a good thing to do.  Jackson also got Alex Lange to sign some cards, when I failed to do so. 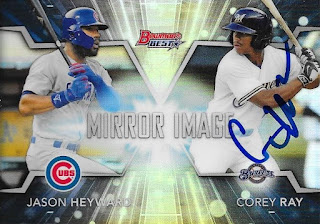 Finally, he got Corey Ray to sign this Bowman's Best.  Ray has moved up to AA, and I can no longer see him with the Carolina Mudcats.

Thanks for the autos, Jackson!
Posted by William Regenthal at 5:39 PM