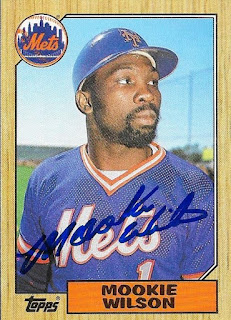 Another private signing helped me add another card to my 1987 set with this success from former Mets World Series hero, Mookie Wilson.  He had the hit that went through Bill Buckner's legs and swayed the momentum of the series toward the Mets back in 1986.

I mailed to the private signing on February 23 and got the card back on April 2, for a 38-day TAT.
Posted by William Regenthal at 7:18 AM