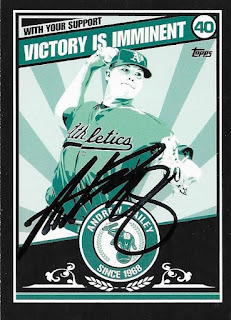 I was excited to get this TTM success back from Andrew Bailey because I really wanted to add one of these 2009 Topps Update propaganda poster cards to my autograph album.  The card turned out really nice, and yes, it does look great in my album.

I also got three different 2010 Topps cards that feature Bailey signed.  I thought it was pretty cool to get each of these done.