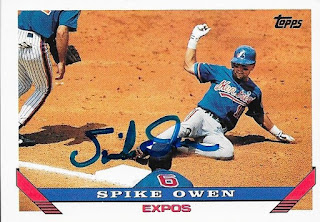 I had a visit from my good friend, Michael this past weekend, and used that time with him to see three games between the Frederick Keys and Down East Wood Ducks.  I knocked out a bunch of cards while we were there, from both the Keys and Wood Ducks. 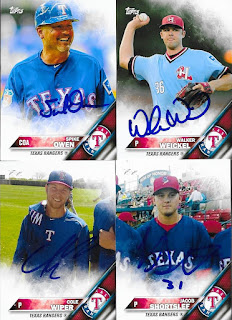 I finished all of the custom cards that Rangersautos made of the Wood Ducks, and I completed his 50/50s.  It was nice to get one out of the way. 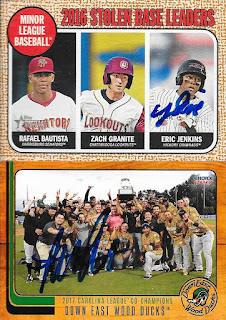 I also knocked out a bunch of 50/50s for Gerard, including a couple of the above 3-way cards that include Eric Jeknins, and I also had last year's bat boy and now clubbie, Matt sign the Wood Ducks team card.  Matt stops and talks with Chris and I at every game, so I felt it was right to get him on a card. 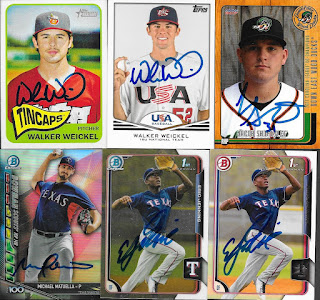 I also finished off all of my Walker Weickels, and also Gerard's Wood Ducks team set.

I added a few new Anthony Gose, coming from a 50/50 from Gerard.  I was also glad to get the Hickory team set card of Spike Owen done. 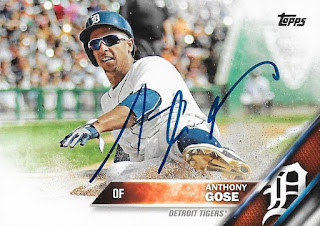 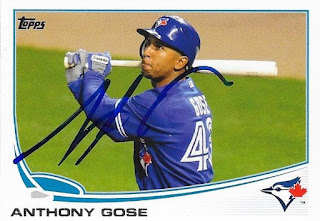 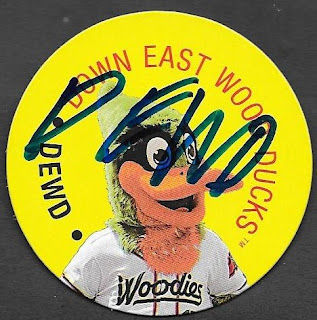 I finally remembered to add the DEWD disc card to my autograph book and get it signed.  It may be goofy, but I thought it was cool to get him to sign it, especially since he couldn't see the card and signed my book instead. 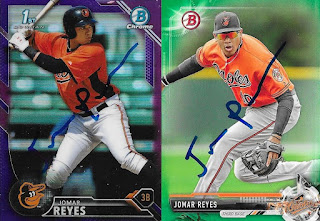 Since the Keys don't come to town often, I made sure to knock out as much as I could.  I had been waiting for Jomar Reyes for a long time, since he was injured when the Keys came last year. 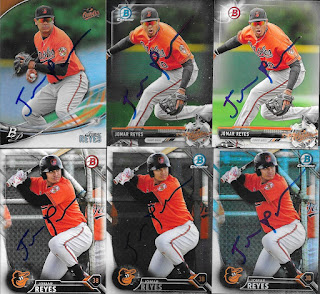 I finished off almost everything I had of Reyes.  I think I only had 2 cards left when the series ended. 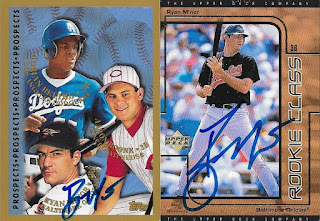 I also used up every card I had of Ryan Minor.  I may try to get the triple rookie done, if one of my Texas buddies can get Adrian Beltre for me.

I also was lucky enough to get cards signed by Ryan McKenna.  He only would sign 2-per, and as the weekend went on, he kept refusing to sign for me, but would sign for Chris and Michael.  It was weird, but I guess it was because I was older.  It's ok, though, I have only 3 cards of him left.  The 2015 Bowman paper was a Christmas gift from my good friend, Anthony, and is numbered to 5. 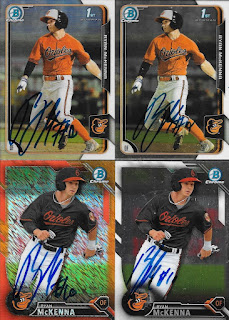 I was able to get a couple of the regular Wood Duck fans that I see at every game to help me get my other McKennas signed.  The didn't mind, and I was able to add these to my album, as well. 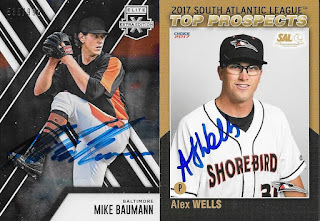 Michael and I went to the card shop on Saturday, and I bought a pack of 2017 Elite Extra Edition.  The first card in the pack was the above Michael Baumann.  I prepped the card and got it into my book for that night's game.  I was also happy to add Alex Wells.  He was pretty nice, even though I only got to see him one time.

I also was able to get three cards done from my 2017 South Atlantic League All Star set done.  I picked this set up in Columbia a couple weeks ago, and three of the guys ended up being with the Keys. 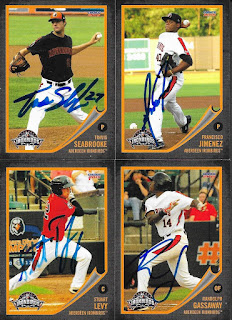 It was also nice being able to knock out a bunch of the Ironbirds team set cards that I got at the end of the season last year. 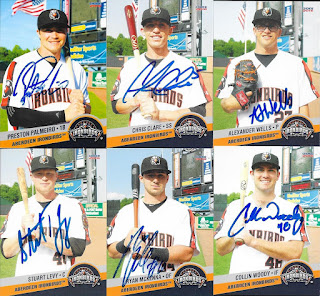 One of the cool things about the Keys was that Preston Palmeiro (son of Rafael) was playing.  I got to speak to him, and had him sign a Carolina League ball, as well as the above team set card.

I got a lot of this team set done.  Some of the autos didn't turn out too great, but I figured it out early, and prepped the rest. 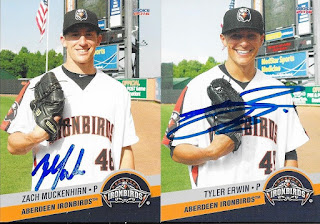 In all, Chris, Michael and I had fun.  I hate that McKenna kept denying me, but that's what happens with graphing sometimes.
Posted by William Regenthal at 6:03 PM