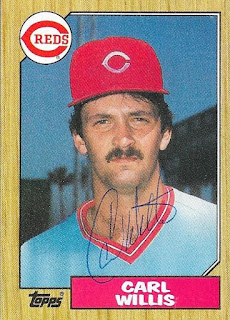 I added another card to my 1987 set with this success from Carl Willis.  He signed the cards that I sent in a ballpoint pen, and the signature is tough to make out on a few of the cards, but they count toward my collection, and I am just happy to have gotten them back.

I got these three cards signed as well, and the 1995 Topps (middle) really doesn't show the auto.  Oh well.