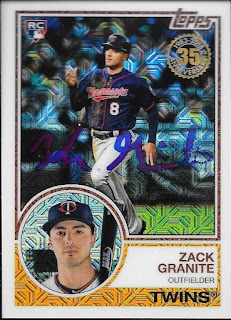 While at the Wood Ducks game last Thursday, I got to talking with my buddy Jackson about maybe taking a road trip this past weekend, since the Wood Ducks were on the road.  Originally, he and I were going to meet up at Buies Creek, his home stadium, and graph the Potomac Nationals and Buies Creek Astros.  After I saw that there was a possibility that Zach Britton would be at Norfolk for a rehab assignment, I talked Jackson into riding along to Norfolk. 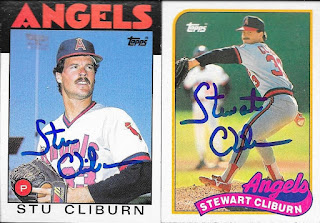 Jackson got to my house around lunchtime on Saturday, which gave us some time to go through a few boxes and set up our autograph books.  He had found some cards for graphing at his house, and we polished it off with a bunch from my boxes.  I was able to find some old Topps cards of the Red Wings coaches, like the above Stu Cliburn Topps cards from 1986 and 1989. 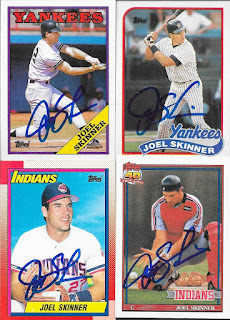 I also found a decent amount of Joel Skinner Topps cards.  I was able to get them signed, and also got a 1985 Topps Father/Son card signed, then promptly sent it off to his dad to complete the card.  I hope it comes back signed. 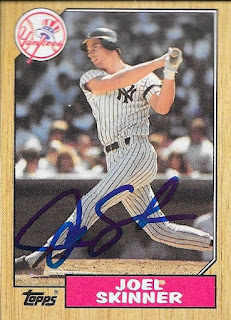 A really cool thing about the trip was that I was able to knock a 1987 Topps off of my list.  It is especially gratifying to be able to find a card in your boxes and turn it into a set need.  Plus, the card turned out great.  I learned later than Skinner is a tough graph; he did walk by us three times in the rain delay, but as he was walking away that third time, I said, "Joel will you sign for us, PLEASE?", and he turned around and signed for us.  He also told me that the '85 Topps Father/Son was his favorite card from his career. 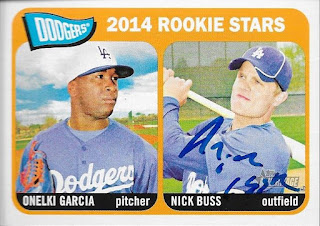 I got on the board at Norfolk when Nick Buss came out to assess the rain delay, and stopped to sign my card.  It was raining lightly when he came by, but it wasn't bad enough to discourage us.  The rain was off and on, and finally cleared up and the game started after an hour and a half rain delay.  Norfolk won the game, but Jackson and I decided to stick by Rochester's clubhouse instead of pursing Norfolk, since I was likely to see Norfolk another time. 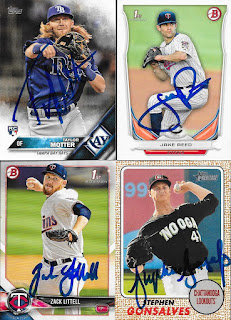 I was able to get a bunch of cards signed outside of the stadium after the game.  The only player that I had cards of that I missed was Kennys Vargas. 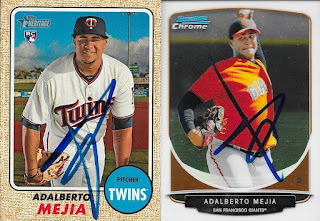 Like I said above, it is a real gratifying feeling when you can pull a card out of your boxes and find a way to get it signed.  The above right Adalberto Mejia 2013 Bowman Chrome is part of a set that I really didn't have many cards of.  Luckily, I did have a Mejia card, and he was kind enough to sign it. 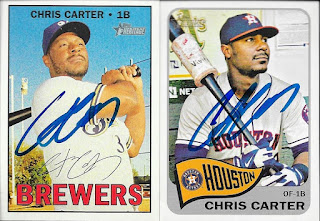 Chris Carter was really cool outside.  Chris and I were looking toward Kennys Vargas, trying to find a way to see if he would sign, without him ripping us in half, when I saw that Jackson was getting Chris Carter.  Chris said really loudly, "Who is that?".  I told him it was Chris Carter, and he told Jackson "He doesn't know who I am, that hurts my feelings!"  Chris walked up to him and asked him for his autograph, and Carter said "Are you sure it's me?"  He smiled and signed our stuff.  He laughed with us, so I know he was just messing with Chris.  Carter is a really down-to-earth guy, despite his size. 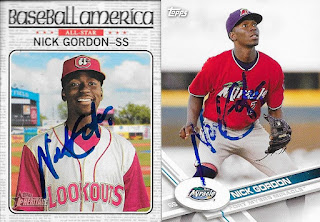 Before the game started, I was able to get Nick Gordon on the above right 2017 Topps Pro Debut.  We must have missed prepping that card, as the auto bubbled like crazy.  So much for a Staedtler pen being amazing... 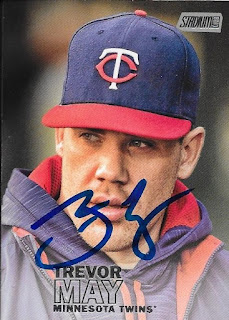 Then I see the job my Staedtler did on the above Stadium Club of Trevor May.  This card WAS prepped, and it looks amazing.  The pen definitely does do a good job, but lesson learned, you do need to prep the cards. 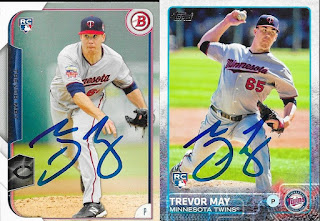 Trevor May was pretty cool.  He wouldn't sign for us coming off of the field, but said he would sign outside.  He was good on his word, and signed everything we had. 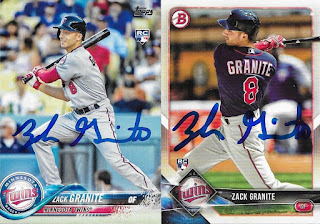 Finally, the player I wanted to get the most was Zack Granite.  I made sure to tell him that as a geologist, I love his last name.  He chuckled, and signed the above right 2018 Bowman.  After the game, he signed for us again outside, which got me the 2018 Topps Chrome '83 at the top of the page.  The above left 2018 Topps finally gets me on the board with 2018 in my album, even though I do have a couple Michael gave me that need to be posted, and some Gerard has for me that are on their way.

In all, I had a great time graphing with Jackson and Chris.  I know Jackson had a good time, and it was really nice to find a suitable road partner who may be willing to do a few of these trips.
Posted by William Regenthal at 9:28 PM