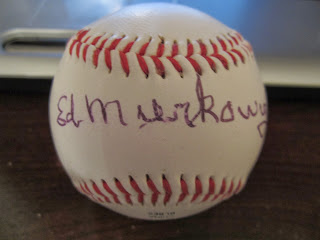 I had my next few days worth of blog posts planned out before I get some big pieces in the mail later on this week.  I had it all planned out until I got a nice surprise in my mailbox today.  One of my brown padded mailers, with ball inside, was in my mailbox.  I hadn't sent off any TTM requests in a while, so I had no idea who it could be.  I had kept the delivery confirmation slips (from when the USPS used to use those) from the balls I hadn't yet received.

Mierkowicz is my 76th TTM success. I mailed to him on January 7, 2012 and got the ball back today, January 2, 2014, an almost 2-year TAT.  I now have, obviously, all of the living members of the 1945 Tigers team and 7 of the overall.  Along with the 5 guys I mentioned above, I also have Hall of Famers Charlie Gehringer and Hal Newhouser.

Along with my ball, I got back my note that I wrote with answers to the questions that I had asked.  The answers were written by Mierkowicz's granddaughter.  Here are the questions and answers:

What was Hank Greenberg like in person?
He was a great guy.

What do you remember most about playing on those Tiger teams?
That I was a "Tiger"!

Were you sad to see Tiger Stadium torn down?
Not really, you can't stop progress.

His granddaughter also wrote a little note on the back apologizing for how long it took to get the ball back to me.  She said that he had lost his wife this year and has been down + slowing down.  I feel really bad for him.  I know that he is 89 years old, but here's to hoping that things pick up for him and that 2014 is better for him.
Posted by William Regenthal at 6:02 PM