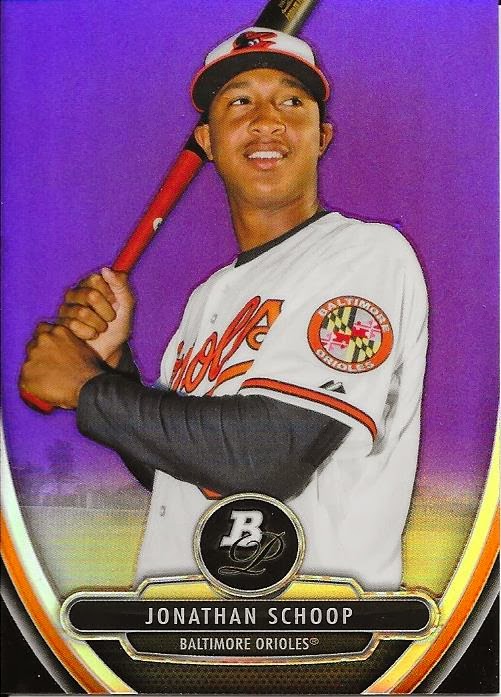 Thankfully, I have reached the end of my posts from the December card show that I went to with my good friend, Scott.  These last few cards are some inserts I got for various PCs.  The above card is the 2013 Bowman Platinum purple chrome parallel of Jonathan Schoop (pronounced - scope).  He is the Orioles' top position player prospect.  Hailing from Curacao, he impressed during the Arizona Fall League.  Schoop likely will begin the season at AAA Norfolk, but could win the Opening Day second base job if he outplays Ryan Flaherty.  No longer are the Orioles waiting on Brian Roberts to return from injury, he cut ties with them this winter and signed with the arch-enemy Yankees.  With Roberts gone, Schoop now has a much clearer path to the majors. 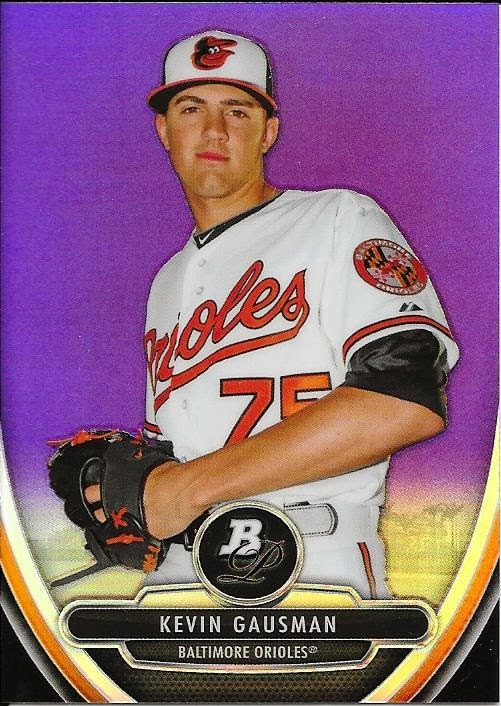 Another player who could start at AAA Norfolk, but could win a job out of Spring Training, Kevin Gausman is the Orioles' #1 pitching prospect in some circles.  If you have Dylan Bundy ahead of him, that's ok, they are 1 and 1A, pretty much.  Gausman has the potential to be very good, he just has to put it together.  I got upset at times last year, mainly because I'm afraid that he is going to end up like other much hyped pitching prospects, like Hayden Penn, Adam Loewen, Daniel Cabrera, Zach Britton, etc.  Let's hope Gausman puts it together and has a strong year.  I know the Orioles need him to, since they haven't signed any other starting pitchers. 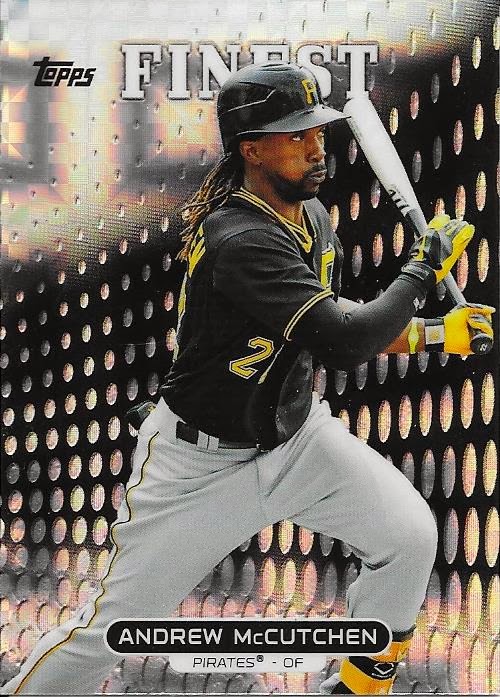 Finally, here is an X-fractor from 2013 Finest of 2013 NL MVP, Andrew McCutchen.  I've had a McCutchen PC going for about two years now.  He is the only current non-Oriole that I have a PC of, but I probably will have a few more this year.  I definitely will continue to get Nate McLouth cards, but he was an Oriole, so I don't know if that counts.  Really, though, there aren't too many other non-Oriole players who interest me like 'Cutch does.  He's such a good player on a team that you can root for.  I hope he keeps up his production and puts together a Hall of Fame career.  At this point, he is definitely on pace.
Posted by William Regenthal at 5:40 PM