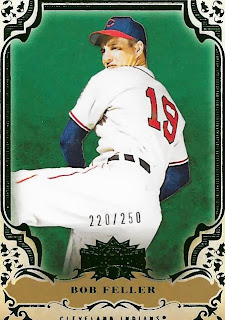 I had a couple issues scanning today, pretty much the same issues I always have when scanning - the scanner chops off edges of cards (above) and this time, it divided the below card into several files.  That's a new one for me.  I just have to get used to the scanner, that's all.

Anyway, I picked up two Bob Feller cards for my PC when I was at the December card show.  The above 2013 Triple Threads was $1.00. 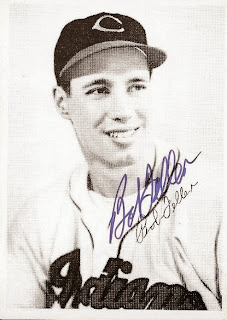 This autographed mini photo was really cool.  I honestly thought it was an off-shade of yellow, until I took it out of it's very aged top loader.  I bought it off of an older fellow at the show who was selling his entire collection.  He couldn't recall how old the mini photo was or what it was even called.  It didn't matter to me, I bought it from him for $15.  I've seen plenty of Feller autos over the last few years to know its legit.

I would be interested in knowing about how old the photo was.  If I had to guess, I'd say it came from the early 50's or so.  Maybe an Indians promotional photo or something?  Who knows.
Posted by William Regenthal at 5:48 PM