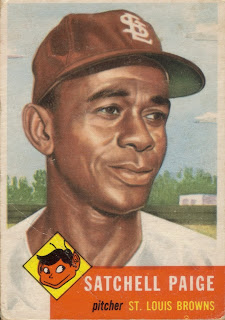 Today, I knocked a card off of my want list that has resided there since I got back into collecting cards in 2005.  I finally own a 1953 Topps Satchel Paige card.  To me, this was an ultimate pickup; a dream blog post, if you will.  Now that I have the card in my possession, I am at a loss as to what to say.  The card is in really good shape considering what I paid for it vs its book value.  There is a crease in the bottom left corner, around the Brownie's ear.  Otherwise, the card is pretty sharp.  There is still some gloss on the face of the card. 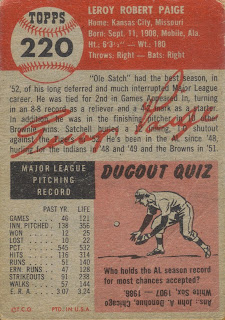 The back looks pretty awesome as well.  If you take a look at the text on the back, you can see that Paige, at approximately 44 years of age had pitched a 12-inning 1-0 shutout against the Tigers in 1952.  I'd like to see another 44-year old accomplish that feat.  According to his baseball-reference page, which you can access here, it says he was actually born in 1906.

Paige's career MLB numbers aren't overly impressive with a record of 28-31, 288 strikeouts and an ERA of 3.29.  It's Paige's career as a whole that tells the true story.  Paige pitched professionally, either via the Negro Leagues, MLB or Barnstorming Teams from 1926 to 1966.  Many times pitching two or three complete games in a day, especially when he was barnstorming.  Many folks regard Paige as the greatest pitcher ever to have played the game.  I'm partial to Bob Feller, but I think they may be right about Paige.

Paige was a member of the 1948 World Series Champion Indians and was elected to the Hall of Fame in 1971 at the first player to be elected solely on his exploits in the Negro Leagues.

I truly love this card.  In my collection, this will rank very close to the top, alongside my 1957 Topps Brooks Robinson, 1948 Leaf Virgil Trucks, my 1995 Leaf Statistical Standouts Cal Ripken and others.  I really am excited I got this card.  I hope you all like seeing it as well.
Posted by William Regenthal at 6:48 PM