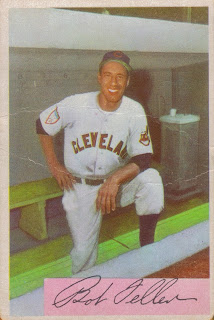 My good friend, Drew, always sends great stuff for birthdays and Christmas.  This year was no exception.  He had already warned me that my Christmas package wasn't going to include a ball, but would still be pretty awesome.  I wasn't worried about the awesome part, because, really, it's the thought that counts.

That being said, when I opened my package, I was very happy with the cards that were inside.  Drew took the time to read my wishlist and knocked two Bob Feller cards off that I needed for my PC.

The top card is Feller's 1954 Bowman.  It's a really cool card, with a smiling Feller posing in the dugout.  A really good shot of him.  I like the old school uniform and patches on his sleeves.  the card is in great shape, too.  There are a couple of creases across the middle of the card, but you have to really look for them.  I like it, that's for sure. 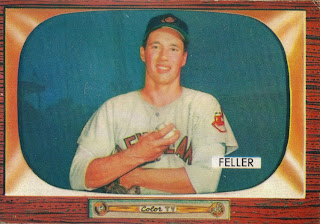 The other card comes out of one of my favorite sets, 1955 Bowman.  This card is in really good shape.  Feller is shown here gripping the ball across the seams.

I really liked the cards that Drew sent.  It's a shame that he has been so busy lately preparing for college because regular posts on his blog have become a thing of the past.  Once a stalwart in the blogosphere, Drew has kind of taken a few steps back into the shadows.  I'm hoping when things calm down for him, he will find his blogging voice again and we will see more posts.

Ok, enough of my shameless plugging.  I spent yesterday's post talking about one of the greatest pitchers in the history of the game and was able to follow it up today with who I have always believed was the greatest.  He is definitely my favorite pitcher of all-time (of which I have many).  One regret I do have, however, is that I was never able to meet Feller in person.  I do want to go to his museum in Iowa one day.  Maybe I'll be able to convince Drew to go on a road trip in the future.  Who knows.

So, thanks for the awesome Christmas present, Drew.  You've always been a class act and I am glad we have been able to collaborate on our blogs for the past 5 years together.  Thanks so much!
Posted by William Regenthal at 4:32 PM