Christmas From Mom and a Surprise Visit 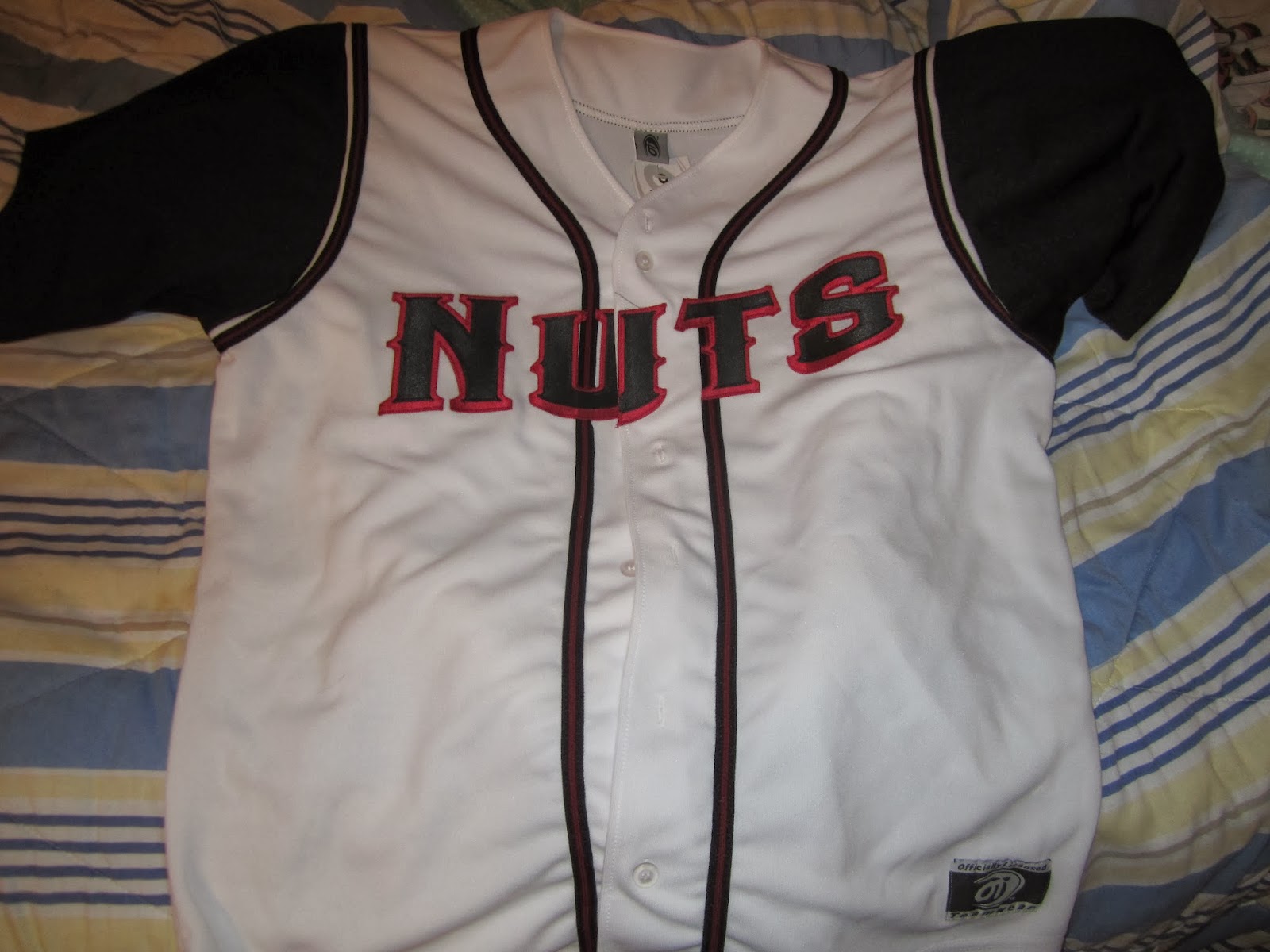 My final post of Christmas presents, and you know how I love to save the best for last, comes as a sort of request.  Almost a demand.  You see, I had some surprise visitors com to the house last night.  My parents (plus my sister and niece) came and stayed over at my house last night since they had to be in the area early this morning.  I told them that since their venue was fairly close, they could crash here and save some money on hotel costs.  Luckily enough, they decided that was a good idea, so they dropped in at 11:30 last night.

In a conversation with Mom, either last night or early this morning, (because I woke up so early, they pretty much blended together) she asked why I hadn't done a blog post on the two minor league jerseys that she got me for Christmas (or the other stuff she got me).  Was it because I hated it?  Did I not like the stuff?  No way, I loved what I got, but I was saving the post.  Anyway, I won't show everything I got, but I will show the jerseys.

Mom has a knack of finding MiLB jerseys that are whimsical or interesting.  She was really fond of the Modesto Nuts jersey shown above.  I tend to agree. Nothing beats the Biscuits jersey she got me a couple years ago in terms of weird team names, but the Modesto Nuts is right up there. 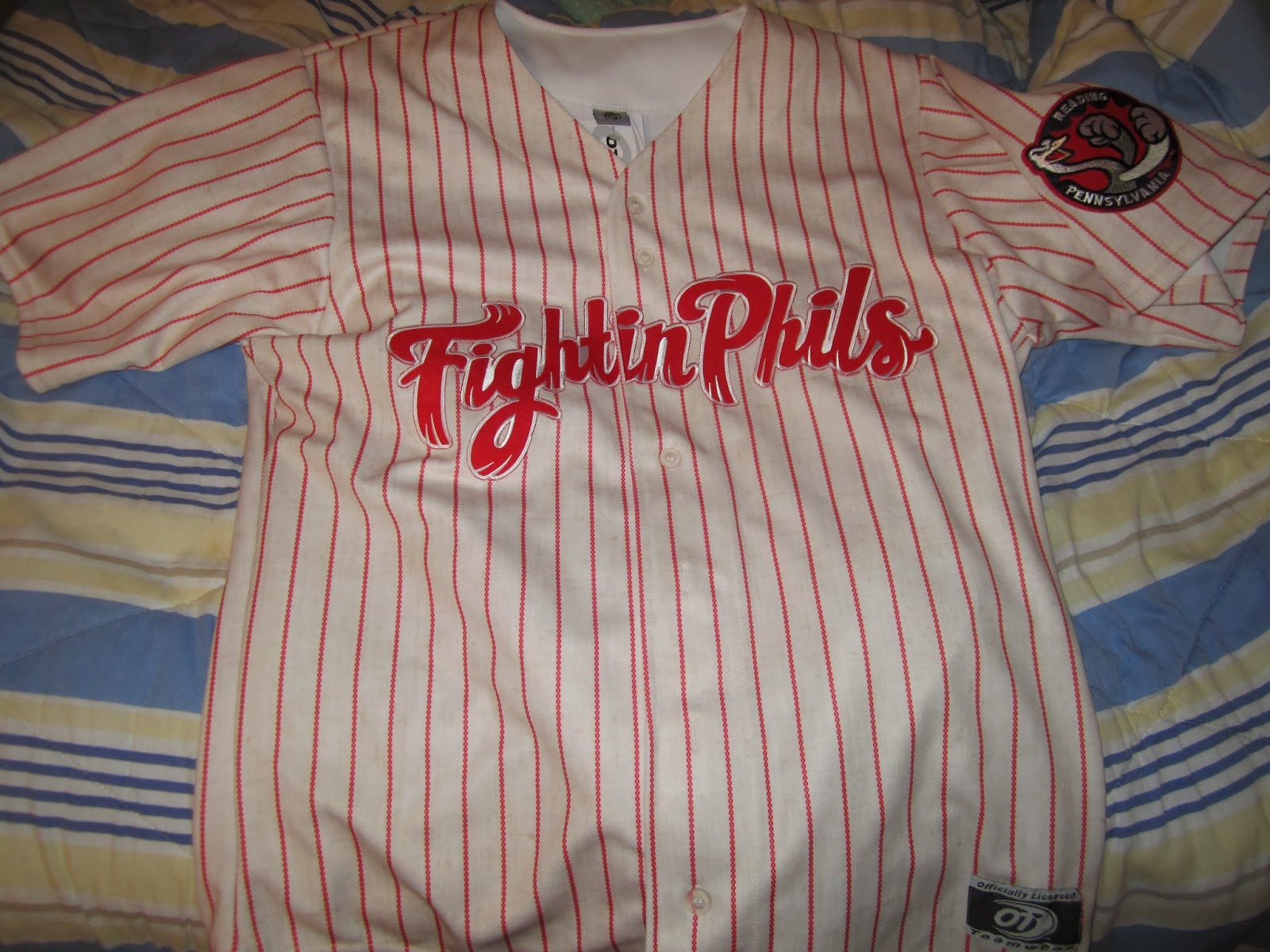 I thought that this Reading Phillies jersey was really nice, too.  I like the old school "Fightin Phils", plus the pinstripes.  The jersey had a bit of a double meaning, since my older brother's name is Philip.  If we were teenagers again, it would be a fitting jersey.  I quit trying to fight him once we hit middle school because he shot up while I stayed scrawny, so I usually got my butt kicked.  I learned pretty quick that 'fightin Phil' was not a good endeavor.

The story doesn't end here with the jerseys, though.  I've spoken often on here in the past about how my mom really supported my interest in the hobby at a young age, even collecting baseballs cards alongside me when I was a teenager.  Something really cool happened last night/this morning, though.

You see, my parents aren't able to get out here on this side of the state often.  Dad has his business and making the three and a half hour trek out here on a weekend is really tough with all of his hobbies and other things going on.  This was, actually, only the second time my parents have seen my house since we bought it in 2011.  So, my dad hadn't really seen the extent of my collection until last night/this morning.

He took one look at my baseballs (you know, my china cabinet with my 98 Hall of Famers, plus lots more of other autos) and said "What the hell are you going to do with all of this stuff?"  My response?  "Look at it!"

This morning, as we were waiting on the girls to wake up, I was showing my mom some of my bobbleheads and die cast race cars, Dad walked up again and said, "So, what's all the fuss in here?"  So, I showed him a few of the things I had on the walls, including some really old racing photos of him, some of his memorabilia, like his old helmet, etc.  He patted me on the back and said, "I'm proud of you, you're just like me!"

My dad has collected a bunch of stuff over the years, HO and Lionel trains, Rocco mini tanks, Johnny West figures, birds (yes, live ones), and scores of other things.  So, my mom helped me get my start with all of this, but I can trace a lot of why I do this to my dad, too.  It was a really cool feeling being able to show him the stuff I've worked hard to collect and display over the years, even though he has admitted that watching baseball is like watching paint dry.  He did get the chance to go to Washington Senators and Baltimore Orioles games with a close friend from school in the early to mid 60's, so he does have that on me.  Little did he know that I would become such a huge Orioles fan.

So, it was really nice to have my parents over last night and this morning.  I really wish they could come up more often, but I do understand.  I'm also really proud that both of them think what I'm doing with all of this is cool.  It means a lot to me.
Posted by William Regenthal at 8:12 PM