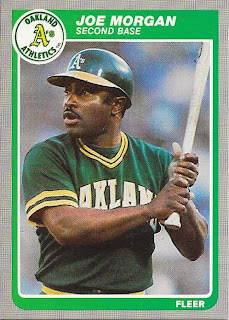 Last week, I went to my LCS for a few supplies and went through some of the boxes of old cards.  In one of them, I picked up some cheap vintage for my son, Chris, and I also got some cards for a couple fellow bloggers.  I did manage to get one card out of the vintage for myself.  The above Joe Morgan 1985 Fleer jumped out at me because I completely forgot that Morgan played for the A's at the end of his career.  He looks so funny in that green and yellow jersey.

I've met Joe Morgan twice now and was impressed with him both times.  Because of that, I may start a PC of him pretty soon.  I'm seriously considering it.  As for the Fleer card itself, I really like it in its simplicity.  The early to mid 80's Fleer offerings were pretty basic, but don't mistake that for a lack of quality.  Some of those cards are pretty sharp-looking.  Case in point, above. 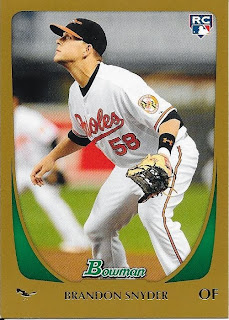 Here is a card of a guy who I have a PC of.  A very small PC, but a PC nonetheless.  Brandon Snyder is another player whom I've met a few times.  He is a really nice guy.  I was happy to see him get a ring for being on the 2013 Red Sox part of the season.  I'm assuming he's going to get a ring.  Anyway, he doesn't have too many cards so, I was happy to find one in a bargain bin that I didn't already own. 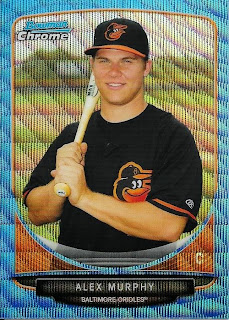 Here is another guy who I am considering starting a PC of.  I have heard quite a bit about Alex Murphy and so far, it has all been good.  He is a local product (local as in he is from Baltimore).  I love the 'Wave' refractors in Bowman Chrome.  I just learned that there are black, red and silver versions as well.  I'm smelling a rainbow.  I'd say I was tasting a rainbow but I don't have any skittles. 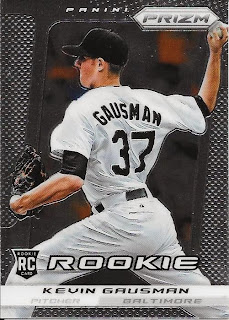 Finally, here is a 2013 Panini Prizm Kevin Gausman RC.  Gausman is someone I started a PC of last year and have been slowly adding to it ever since.  In a perfect world, Gausman starts the year in AAA Norfolk (meaning the O's signed a decent starting pitcher so Gausman isn't needed in the rotation at the beginning of the year).

So, there you have it, some PC stuff of guys not named Chris Davis.  I know one fellow blogger who will appreciate that.
Posted by William Regenthal at 9:23 PM