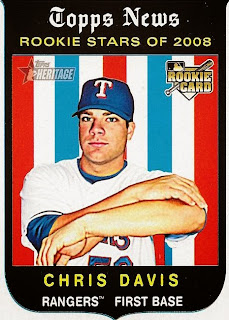 This post will serve two purposes for me.  One, it will catch me up on the Chris Davis cards I got recently via my LCS, COMC, Ebay and the December card show.  The other purpose is that this is a test of my new laptop and printer/scanner.  I finally was able to upgrade both of those devices this weekend and am really happy with the results so far.

The above card was found at my LCS in the dollar bin.  It is a 2008 Topps Heritage High Number rookie card.  It scanned really nicely, if I do say so myself.  I just can't believe this card sat in that dollar bin as long as it did. 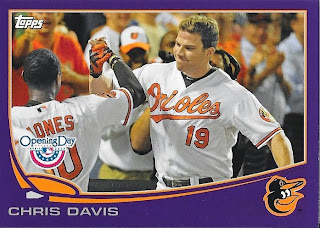 Next up is the 2013 Topps Opening Day purple.  I had no idea these existed until a couple months ago when I saw one on Ebay for $20.00.  I'm glad I waited because I found this one for less than $5.  I just hope there aren't Target Red or Wal Mart Blue versions of these. 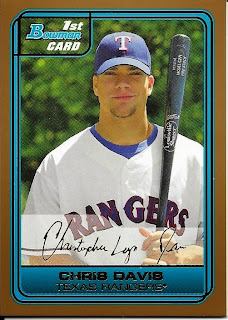 I found this 2006 Bowman gold Davis in a dime box at the December card show.  I got a bunch of Davis cards at the show, actually.  I know Scott is happy that I am combining all of them into one post, instead of breaking them out to multiple posts. 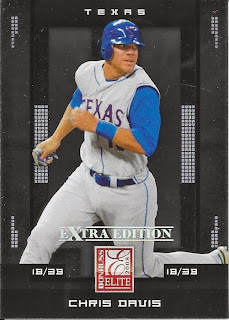 I liked that I found this 2008 Donruss Elite Extra Edition Davis in another bargain box at the show. 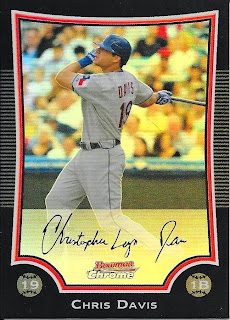 Same with this 2009 Bowman Chrome Refractor. 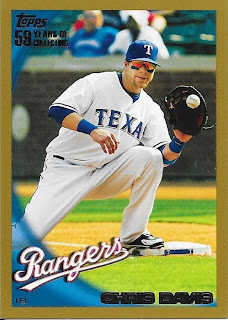 This 2010 Topps Gold came from a COMC purchase (from September, I think). 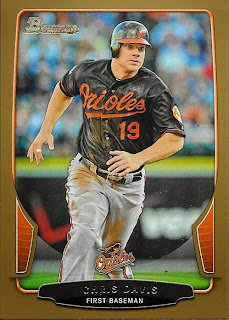 Finally, here is a 2013 Bowman Gold Davis that I found at the show in one of the same dime boxes as before.  I feel like I did a really good job getting Davis cards for my PC there.

So, there you have it, you're all caught up for the time being on my Chris Davis PC.
Posted by William Regenthal at 10:00 PM