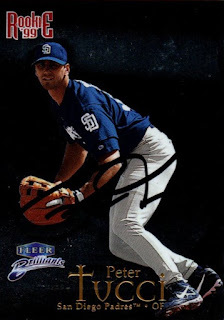 1999 Fleer Brilliants is a really nice set.  I believe it was Fleer's attempt at a chrome set, and these are really sharp.  One of the bad things about the fall of past trading card companies was the fall of Fleer in the early-to-mid 2000s.  They had over-saturated the market with really nice sets and designs, but it seemed like they spread themselves too thin.  A lot of their stuff from the late 90s to early 2000s was ahead of its time, and really nice stuff to look at.

I was really happy to get this signed card back TTM from Peter Tucci.  The auto doesn't show up too great on the scan, but in person, the card is sharp.  I'd like to find a few more of these that I can send off.

Posted by William Regenthal at 10:54 PM