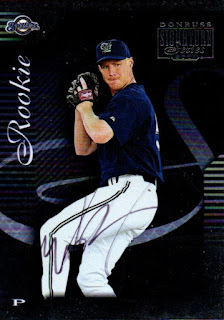 Here is a nice card that i found in one of the boxes from my former LCS.  This is a 2001 Donruss Signature Series that I sent off TTM to Mike Penney.  He hadn't signed in a long time, so I figured I'd take a chance and see if I could get the card signed.  The signature isn't much, but the card is signed and now in my album.

Posted by William Regenthal at 1:51 PM