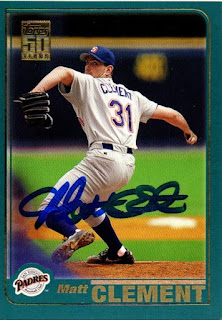 These cards stayed out in the mail for quite a long time, but I finally received a TTM success from Matt Clement.  I had some older Bowmans and a couple early 2000s Topps cards for Clement, and they turned out nicely.

The 1997 Bowman (above, left) turned out well; I was glad to get one of those out, as I don't have very many of them signed.  They seem to live in my boxes and it was good to get at least one of them into my album.  I also like the early 1st Bowman logo.

Posted by William Regenthal at 5:41 PM

I enjoyed his Cubs tenure. Pretty sure he was popular overall.