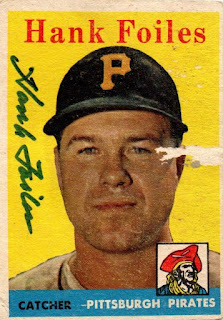 This 1958 Topps of Hank Foiles may be beat up, but it has finally been signed TTM and now resides in my autograph album.  I had the card in my collection for a long time, and had even sent it TTM to Foiles in the past; only to be foiled.  Oof.  So, when a private signing came up, I went for it, and added some more frequent flyer miles to the card. 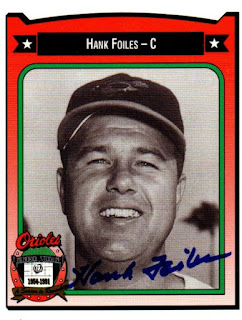 I also went ahead and paid the huge fee to have Foiles sign my 1991 Crown Orioles card.  Apparently, he had refused to sign this card in the past, since he was never paid for it.  I think I had seen that the vendor got 18 of these signed, so I felt like this would be a kind of rare thing to have in the autograph album.  The price was super high, but in the end, I'm glad I did it.