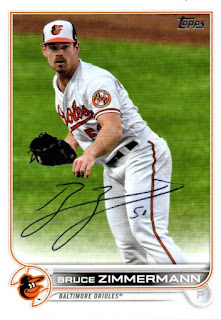 Another Spring Training TTM success came in, and this one was from Orioles pitcher, Bruce Zimmermann.  I was able to add a 2022 Topps to the autograph album, as well as a 2021 Topps Update.  Both cards turned out nicely, even though they were signed in ballpoint pen. 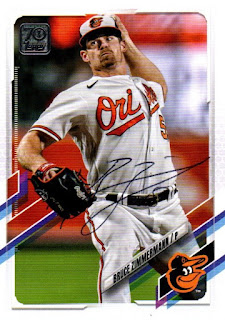 Zimmermann (b. 1995) was part of the return in the Orioles trade of Kevin Gausman and Darren O'Day to the Braves in July 2018.  He made his major league debut in 2020, and has pitched for the Orioles since then.  He started this season off looking like a potential top of the rotation candidate, but has been rocked as of late.  It looks like the league has adjusted to him, and he needs to counter.  So far in his career, he is 6-10 with 109 strike outs and a 5.61 ERA.

I mailed to Zimmermann via Orioles Spring Training on March 11 and got the cards back on April 11, for a 31-day TAT.

Posted by William Regenthal at 5:03 PM