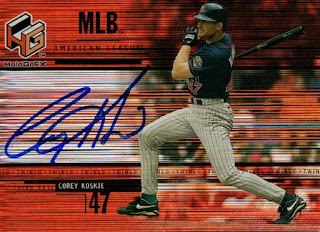 A private signing popped up for Corey Koskie recently, and I had the perfect card that I wanted to send.  This 2000 Upper Deck HoloGrFX.  I kept seeing it in my box, and wanted to get it signed.  Of course, when the signing came up, I couldn't remember which box I saw it in, so I had to thrash to find the card.  Had I not been looking for it, it would have been right under my nose.

Posted by William Regenthal at 6:28 PM