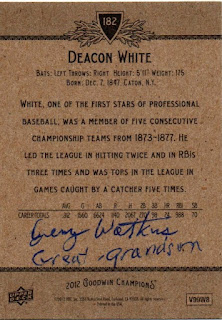 This 2012 Upper Deck Goodwin Champions card had been in my box for a very long time.  I kept seeing it, and regretted not taking it with me when I went to the Hall of Fame induction ceremony when Deacon White was inducted.  I met his great grandson, Jerry Watkins, and stood with him for a photo.  He was very nice, then, and I kept kicking myself for not bringing the care with me. 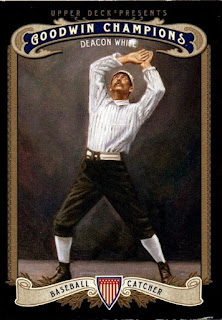 In the time since that ceremony, I have gotten fairly decent in looking folks up, so I took a shot to see if I could get Watkins to sign his great-grandfather's card.  I was successful, and got a nice letter back, as well.

White was inducted into the Hall of Fame via the Pre-Integration Era Committee in 2013.  He was one of the game's early stars, and a catcher back when catchers caught bare handed.

Posted by William Regenthal at 11:22 PM