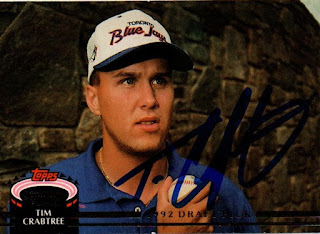 Here are some 90s cards that I thought were TTM-worthy that I can now add to my album.  I like the rock wall behind Tim Crabtree in this 1992 Stadium Club.  I like a card with a nice backdrop, and this one fits the bill.  I also love the 90s-era Blue Jays hat. 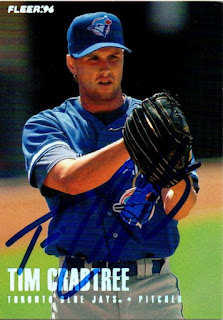 This is a glossy 1996 Fleer.  These were inserts that year; the base set of Fleer was a matte finish meant for better autographing.  The cards are decent, but a pain to leaf through (the matte ones).

Posted by William Regenthal at 11:09 PM