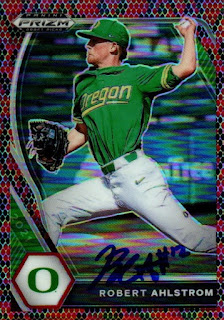 Another series has come and gone at Grainger Stadium.  This week, the Charleston Riverdogs came to town for a 6-game series that went back and forth.  The Wood Ducks settled for a series split with the Riverdogs.  I was hpoing they would take the series, as a little bit of payback for last season's loss in the Championship round.
I got some nice cards in of Robby Ahlstrom.  The above 2021 Panini Prizm is the snakeskin parallel, numbered 11/25.  Ahlstrom liked these cards and remarked how he hadn't gotten any of his own cards, yet, so I ordered one of these off of Ebay that night.  The card will arrive while the Woodies are out of town, so I will have to give it to Robby next time they are home. 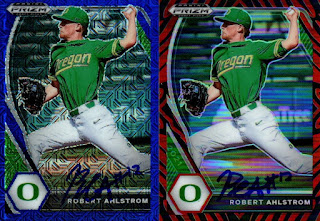 I had also picked up these two parallels.  Both of them look awesome, and I really wish I had been able to find Prizm when it came out.

Ryan Garcia was added to the roster during this series, so I was finally able to get these cards signed that I had pulled for Hickory last season.  He had Tommy John surgery, followed by two lat strains, which kept him out last season.  He pitched on Saturday, and looked really good. 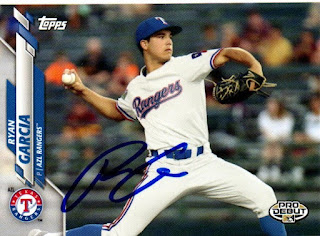 I was also able to get this 2020 Pro Debut signed.  I was really glad to get these cards off of my desk, which is where they sat after my visit to Hickory last season. 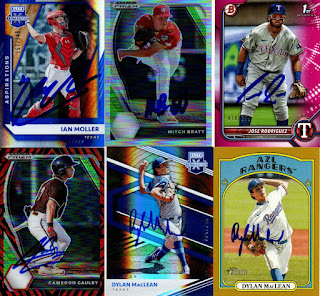 I got some nice parallels signed of Ian Moller (who hit his first home run of the season, this series), Jose Rodriguez, Cam Cauley and Dylan MacLean.  My friend, Gerard, hooked me up with the Jose and the Dylans; the gold Heritage Minors of MacLean is numbered 14/18. I had met Jonathan George a few series ago, when he was in town scouting for the Rangers.  Since then, I have carried his cards in my book, waiting for him to come back.  He was finally back yesterday (Saturday) and signed the 5 cards that I brought with me. 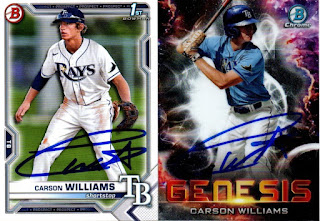 Several of the Riverdogs players that had cards were on the IL, so a lot of what I had pulled and prepped went back in the Box of Shame.  The guys that were there were fairly tough.  Only one of the six games of the series saw the Riverdogs with numbers on the front of their jerseys.  That made spotting the guys tougher at the onset of the series.  Carson Williams was the toughest of the guys with cards.  He only signed a couple of times, then shut me down saying "I got you yesterday; I'm only doing one per person now..."  He also told a few people that he would only sign cards when they showed him photos to sign.  I'm pretty sure he did sign a couple baseballs for some folks early in the series. 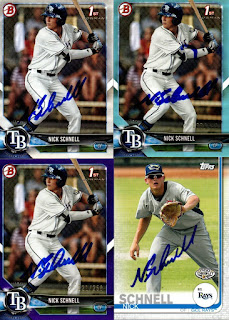 Nick Schnell was supposed to come through last season when Charleston was here at the end of the year, but had gone on the IL right before that series started.  I carried over the cards I had of him of my own and also 50/50s for guys until now.  He signed one per each time he came by, but signed every time he came by, which was nice.  I ended up finishing all of my Schnell cards, which was a goal.  I don't like having to put stuff back in my boxes. 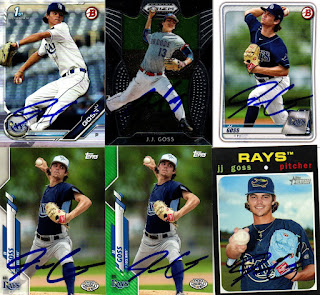 Finally, JJ Goss was another of the guys who was supposed to come through last season, but also had gone on the IL.  I ended up with a ton of his cards, but he was good for 2 per prior to every game, except for Saturday when he was starting.  I finished off a good many of his cards, but still have a bunch I will need to carry over until the next time I see him (Durham, maybe?).

Posted by William Regenthal at 8:24 PM