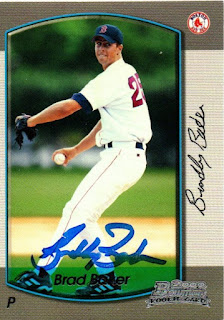 A few more older Bowman cards came out of my box (along with a 2000 Topps and 2000 Topps Traded) and went into my album with thus TTM success from Brad Baker.  The above 2000 Bowman turned our nicely.

The 2001 Bowman Chrome and Topps cards also look nice.  I was glad to get a few cards out of the 90s-00s Bowman box I inherited from my former LCS.

Posted by William Regenthal at 2:09 AM