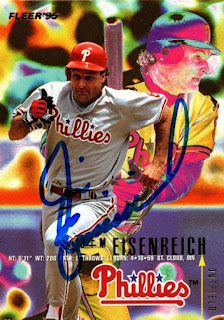 Hey, it's another 1995 Fleer in my autograph album! The freakiest set yields some nice signed cards, and this one was the key to what I sent off TTM to Jim Eisenreich.

I added some nice Topps cards, as well, but the Fleer turned out the best, in my opinion. 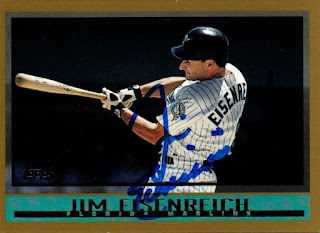 I mailed to Eisenreich on February 10 and got the cards back on March 19, for a 37-day TAT.

Love the action shot on the 1998 Topps card! Pretty cool that he signs TTM.