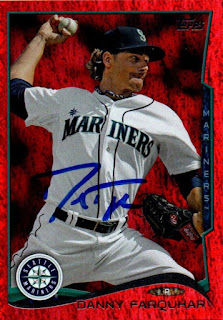 Something about best laid plans...  I had the bright idea of treating my parents to an anniversary present of taking them to a Dash game last weekend.  I bought six tickets after the earth stopped spinning when my dad agreed to go to the game.  The weather was horrible leading up to Saturday, including a rainout on Friday, forcing a potential double header for Saturday.  It rained all day, and the games ended up being canceled, after we had gotten into the ballpark and stood for an hour or so watching the Hickory guys play in the batting cages.  Even worse were the ushers who, I guess, didn't realize it was raining, that the four of us (Mom and Dad were smart to wait and not make the drive to the ballpark) were the only people in the cage area staying dry, and that we personally knew most of the players.
I don't normally fault someone who is just doing their job, but this made the third time in two years that I, and other people, have been run out of an area by the Dash ushers, for no discernable reason.  She said we needed a wristband to be where we were, but it WAS RAINING and we WERE THE ONLY PEOPLE THERE!  Furthermore, I heard that the following day, folks were allowed to graph in the same area and were not run out at all.  So, yeah, the Dash ushers are the worst I have come into contact with in any Minor League stadium.  Major Leagues are a different story.  All that being said, I still did fairly well graphing, and was able to see my guy, Cody Freeman.  He even took my books from me and put them on a table near the clubhouse door, so all of the Hickory guys could sign my cards.  John Matthews took it a step further, and took the books into the clubohuse to work on the newly minted team set, until the lady told us to leave. 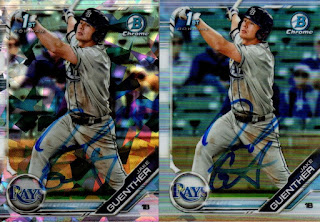 All in all, I was still happy; I finally got my 2014 Topps Red Hot foil parallel of Danny Farquhar signed, along with these two 2019 Bowman Chrome parallels of Jake Guenther that didn't come in until after I got home from the last trip to Winston.  The rain and humidity, paired with the rough matte finish on the team set cards killed my Staedtler, so I got some crappy autos, as well. 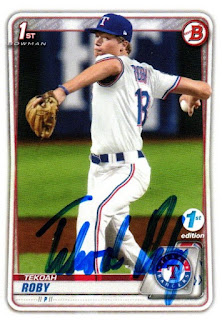 My friend, Jesse, hooked me up with this 2020 Bowman First Edition TK Roby, which was a nice card. 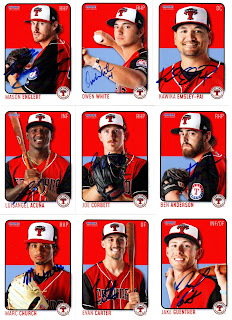 I like the team set from this year, but the cards do have a bit of a rough finish that takes away from the signatures a bit.  I later switched pens, so maybe some team set cards I get signed later this season will turn out better. 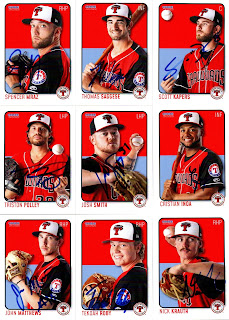 It was nice seeing the guys as much as I was able.  The experience could have been better; I wasn't a fan of the lady standing and watching the players hug Chris and rush us along as they were trying to have a conversation with him.  It bothered my sister so much, that she has sworn off going back to the Dash, which is a shame. 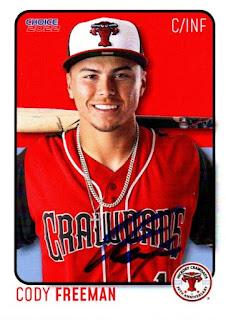 I'll probably go back; I mean, I have to, I have six tickets I still need to use.  I was happy to see Cody, and get a hug.  He's still one of the nicest people on the planet, and I always enjoy catching up with him.

Posted by William Regenthal at 9:05 PM

And you were able to attend your parents 40th anniversary party. Good thing the Wood Ducks weren't playing at home 😑