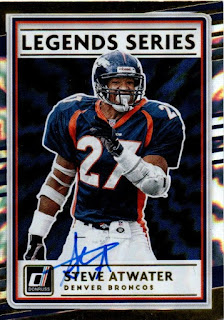 Here is another random football card that I was able to get back signed TTM.  This is a 2020 Donruss Legends Series signed by Steve Atwater.  I found it among a box of recent football cards that I got from my former LCS.

Posted by William Regenthal at 11:29 PM