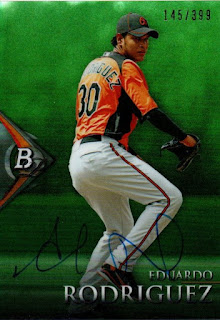 My good friend, Gerard, and his brother have been setting up more private signings recently.  One of the ones that I was able to get a return from was former Oriole, Eduardo Rodriguez.  I had this 2014 Bowman Platinum green refractor in my Orioles box for a long time, and finally sent it out for signature.  When the cards came back, a lot of hate was thrown their way for the quality of the autograph that Rodriguez put on the card.  I thought a lot of that was unfounded, since the promoters can't control how a person signs their name.  It is Rodriguez's autograph, love it or hate it.  I, personally, am glad I have the signed cards to put in my album.  Other people can just choose not to engage in a Rodriguez signing; it's that simple. 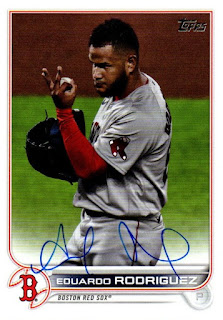 I also got this 2022 Topps signed.  Ridriguez's signature does show up better on this card, but again, I didn't have an issue with it in the first place.