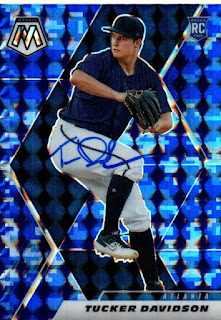 A lot of people aren't fans of the unlicensed products released b Panini, but I don't mind them.  2021 Mosaic is a nice product, and some of the parallels looks really cool.  This one is a blue digital camo parallel, and I was able to get it signed TTM by Tucker Davidson.  I think the card turned out great, and will look cool in my album.

Posted by William Regenthal at 10:35 AM