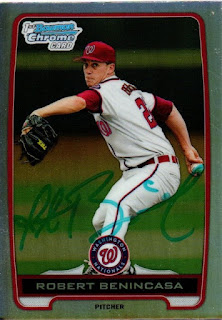 Here is another 2012 Bowman Chrome refractor that I was able to get signed TTM.  This one came from former Nationals minor leaguer, Robert Benincasa.  He signed the card with a light blue marker.  The autograph looks nice in that shade of blue; I just hope it doesn't fade.

Posted by William Regenthal at 7:24 PM