May 2022 Graphing of Yard Goats at Baysox 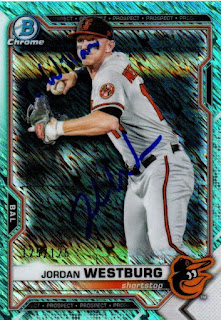 With the Wood Ducks out of town this weekend, I decided to head to Bowie and catch a few Orioles prospects that I had missed in the past.  I had the above 2021 Bowman Chrome aqua shimmer refractor of Jordan Westburg that I absolutely wanted to get signed.  He signed it, even though it is personalized.  That doesn't really matter to me, except for one of the guys I was with took one of my Gunnar Henderson cards and said "I'll get him to sign it for you."  I told him that Gunnar would ask his name an personalize the card and the guy said "That's ok, I'll tell him my name is William, too..."

So, I let him take my 2020 Topps Heritage Minors Gunnar Henderson, and he proceeded to tell him "Oh, my name is Carl..."  Meaning, he personalized the card to Carl.  I told Carl, "Hey, it's no big deal, you can keep the card.  I have a few other of these, so I'll bring one next time."  Carl said, "Oh, no, I don't want it.  It's funnier if you have a card in your collection with someone else's name on it."  I would have much rather he kept the card, though.  To be fair, he's my friend's uncle, and he was fun to talk to about baseball during the game, and he did seemingly have a good time.  I just don't think he quite understood how I enjoy getting autographs and put a lot of time in preparing for trips like this.  To each their own, I suppose. 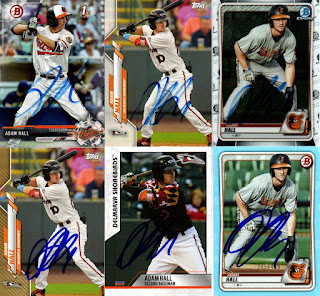 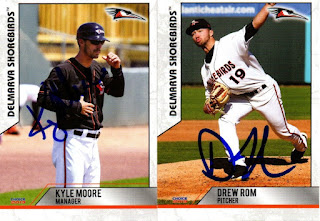 I also was able to get a couple cards signed out of my 2019 Delmarva team set.  Dean Kremer was rehabbing with the Baysox, but he ignored us.  Hudson Haskin also ignored us pre and post-game.  We also were ignored by Zach Watson.

Speaking of Watson, I almost missed that he was on the roster.  While thrashing on Friday to find some of his cards, I found two Riley Pint cards that I had picked up from a dime box at last year's National.  I also had found the 2020 Heritage Minors Michael Toglia card while looking for some 50/50 stuff.  So, after the game, Alex and his aunt and uncle left; I stayed behind and was able to get the two Yard Goat guys I had cards of.  I got them outside, which was a lot easier than I remember from the last time I was in Bowie.

Personalizations aside, I had a great with with Alex and his family, and I would definitely go with them to another game.  Bowie is really easy to graph at, even if you have some guys ignoring you.

Posted by William Regenthal at 10:53 PM