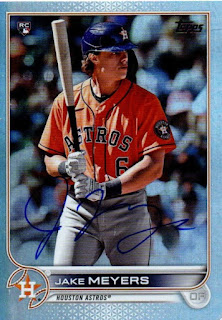 The second TTM success from the small batch of 2022 Topps came back from Astros Jake Meyers.  I wish I had gone through some old team sets, because I realized later on that I had a couple Carolina League All Star cards of Meyers in a box.  Oh well, I can try again next year. 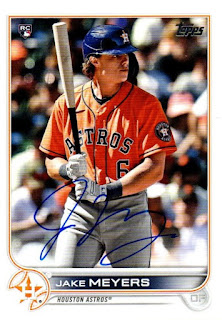 I got his 2022 Topps base and foil insert signed, and they both turned out nicely.

Meyers (b. 1996) made his major league debut last season with the Astros.  Last season, he had 38 hits, 6 home runs and a .260 batting average.  He hasn't played yet this season, but that is largely due to him being on the IL.

Posted by William Regenthal at 7:44 AM