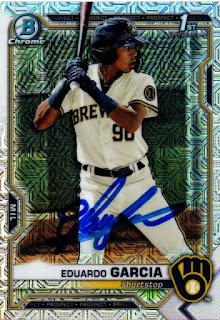 Another homestand has come and gone, this one being an eventful one between regional rivals, the Carolina Mudcats and Down East Wood Ducks.  Usually, there isn't much of a rivalry; but this series saw benches and bullpens clear twice, and a lot of chirping going on.  Luckily, no one really came to blows, and only one person was ejected (that I saw).
I was able to get a lot of cards signed, and finished off all of what I had for the Mudcats.  The above 2021 Bowman Draft chrome mojo parallel of Eduardo Garcia is one I actually pulled myself, so it was nice to get it signed. 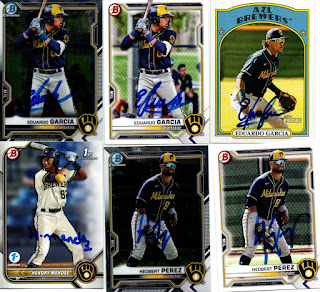 Several of the Mudcats have cards, and the signature I liked the most was Hendry Mendez on the 2022 Bowman First Edition.  He has a cool signature, and I was glad a fellow Instagrammer sent two, so I could get one signed.  He also sent several Hedbert Perez cards, one of which is the 2021 Bowman Draft Chrome shown above. 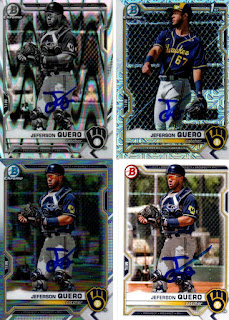 I ordered a Jeferson Quero Ray Wave parallel from Ebay, and it turned out great, even though Quero's signature looks like a bike. 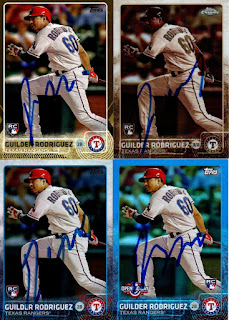 My friend, Gerard, sent an assortment of Guilder Rodriguez cards, and I got a good many of them signed.  I have a bunch left, still, but those can be gotten over the course of the next few months. 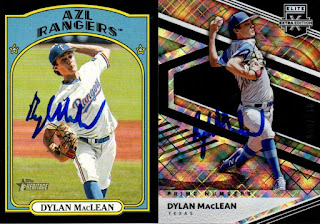 Finally, Gerard ordered a few Dylan MacLeans to be delivered to the house, and they got here in time to be added to the book to get signed.  Dylan even liked the color parallel.

I had a good time this series, even with the jawing back and forth between the two teams.  It is a long season, and I think there will still be some animosity when the Mudcats come back to town.

Posted by William Regenthal at 10:23 PM