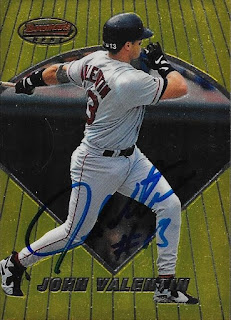 I waited a long time for successes to come back up for John Valentin before I sent to him.  I had seen successes in the past, but as I built up a stack of cards to choose from, he stopped signing.  When he popped back up again, I went ahead and sent several cards to get signed finally.
The above 1996 Bowmans Best turned out really well.  These are some really nice cards, and I was glad to get one in my album. 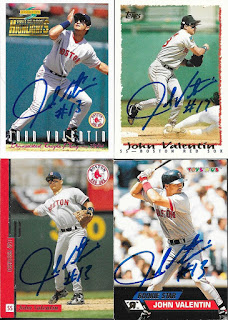 Valentin also signed some other cards like the 1995 Score Season Highlights - unassisted triple play (top left), which looks really cool.  I got a Topps base issue in (top right, 1995 Topps), a 1996 Leaf Preferred (bottom left) and a 1993 Toys R Us Stadium Club Rookie Stars (bottom right). 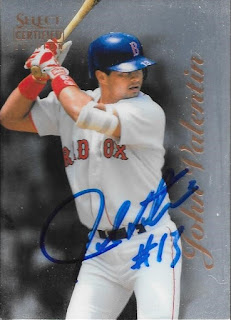 Finally, there was this 1996 Select Certified that I had found at my LCS a few years ago.  This one also turned out great.

Posted by William Regenthal at 5:20 PM