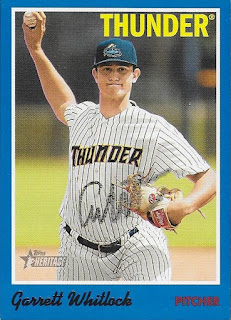 This might be one of my more disappointing TTM successes.  I had some nice cards of Garrett Whitlock, and the cards I got back had some pretty bad autos on them.  The aboce 2019 Heirtage Minors blue parallel is numbered 68/99 and it looks like his pen was on its deathbed. 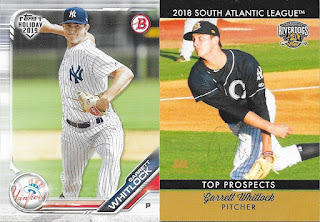 The 2018 South Atlantic League Top Prospects card has a signature that you can barely see.  The 2019 Bowman Holiday has the impression of a pen on it, but no ink.  I may send these back at some point, but as of now, they'll just sit in my album.
Whitlock (b. 1996) was an 18th round pick by the Yankees in the 2017 June Amateur Draft out of the University of Alabama at Birmingham.  He has a record of 12-8 with 201 strike outs and a 2.41 ERA while rising up to the AA level.
I mailed to Whitlock on January 6 and got the cards back kind of signed on July 24, for a 200-day TAT.
Posted by William Regenthal at 8:20 PM