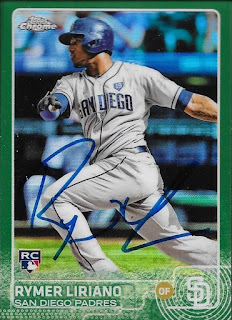 A private signing with Rymer Liriano came up and I probably would have skipped on by it, except for the fact that I had this really nice green parallel from 2015 Topps Chrome.  I kept seeing it when I would go through my boxes, so I decided to go ahead and get it signed.  I had a 2015 Topps base of Liriano right behind the chrome in my box, so I sent that out, too. 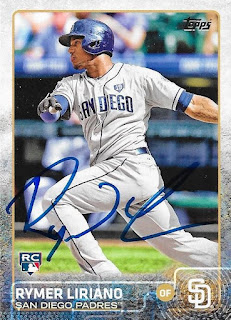 Both cards look great, and will be added to my autograph album.  I haven't gotten a signed 2015 Topps back in a bit, so getting this one done was nice.

Posted by William Regenthal at 5:45 PM