Some Great Signed Cards From Jackson 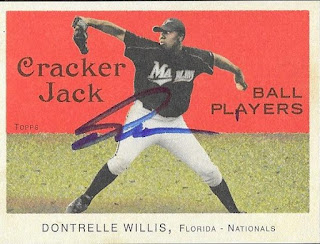 My friend Jackson, in Arizona, took a 50/50 for me and also sold me a signed card.  The card he sold was the 2004 Cracker Jack Dotrelle Willis shown above.  I really like the Cracker Jack set, and have contemplated picking up a box.  The cards look great when signed.  Jackson did a private signing with Willis, which I missed.  Thankfully, he had some extras, and I picked this beauty up. 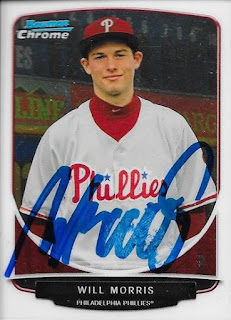 Jackson also sees Will Morris and Harvey Monte locally over there, so he got some cards out of my boxes and had them signed for me.  We split the Morris cards, and since I had only one Monte, he gave me that one.

I was afraid that I wouldn't have any Monte, but I had the single card in my "rookies" box, so it was good to get that one out.

Thanks so much for taking the cards and selling me the Willis, Jackson!

Posted by William Regenthal at 11:01 PM