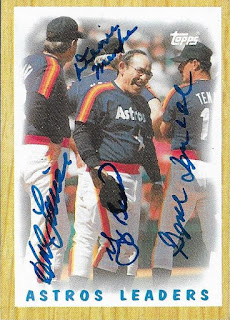 These was a lot of sweating prior to and during this TTM request that I sent to Gene Tenace.  It started with finding a needle in a haystack by seeing this Yogi Berra signed 1987 Topps Astros leaders card at the Cleveland National a couple years ago.  I picked it up for $20 and put it in my 87 album.  When I saw a Hal Lanier signing finally come up, I sent it off to him.  Lanier is spotty lately with TTM returns, so I wanted the assurance of locking in with a paid signing and getting my card done that way.  It is still risky, of course, because things can happen and cards can get wrecked when sending through the mail.  The card came back from the Lanier signing, and I was ready to send it off to Denis Menke, who I have gotten TTM from before.  I believe the guy who ran the Lanier signing told Menke the card was coming, and it got back to me signed really fast (9 days).  Finally, I turned it around and sent to Gene Tenace, who signs through PastPros.  This awesome card is now complete and has its place in my 87 album. 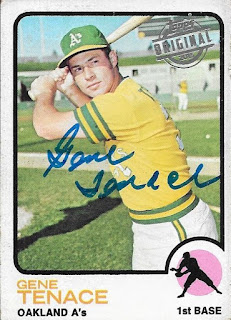 I also sent off this 1973 Topps buyback that I had pulled several years ago.  It also turned out well, but definitely takes a back seat to the Astros Leaders card.

Congratulations! That is a beautiful card!