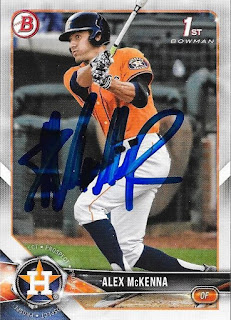 I got a message on Instagram earlier in the year from a guy named Andrew, who does some 50/50s with me during the minor league season.  I can't remember where he was going (I think he went to Spring Training) and got me a few cards signed.  This was really nice, it turns out, because I wasn't able to do hardly any 50/50s due to the pandemic.  So, Andrew got me a few cards signed by Alex McKenna.  I had pulled McKenna's cards, since I thought he might have ended up at Fayetteville this year, so his stuff was easy to find. 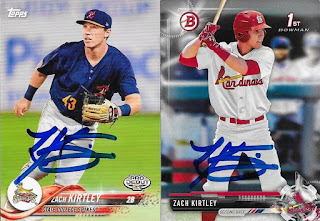 I had pulled Zach Kirtley because I was going to try him at Spring Training, so his stuff was all in one spot, as well.  I was glad to get a 2017 Bowman out of my box, as getting those signed has slowed down big time, since the cards are getting older now. 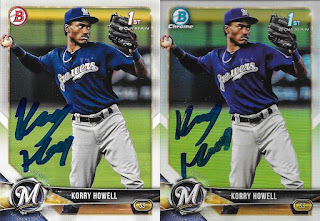 Finally, Andrew got me a few Korry Howell cards done.  Again, these were all in one place, because I had them pulled for the upcoming Mudcats season.
I'll have to do some major reorganizing of my boxes before next season (if there is one), because a lot of things will be changing on the minor league landscape.  Hopefully, graphing won't change all that much, but that remains to be seen.
Posted by William Regenthal at 9:30 PM