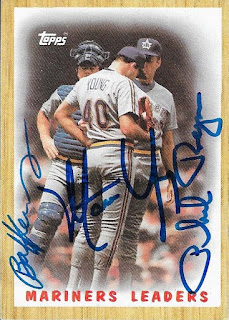 My quest to complete the signed 1987 Topps set has been a tough task.  Originally, I was ok with just getting ink on every card; not necessarily getting every single autograph possible.  It sounds like a cop-out, but some of the team leaders cards are going to be near impossible to finish.  I've talked with Mike Valic, a guy who actually has completed the set, and the team leaders cards represent the toughest of the tough projects to take on inside the set itself.  For example, the White Sox leaders card has the deceased Eddie Brinkman; Reds has Bo Diaz, Red Sox has John McNamara and Tom Seaver.  All of those, I'll have to find with signatures of the deceased folks, and also probably will have to find a way to ass the living guys on the cards (I have a Red Sox one with Rich Gedman; Reds with Pete Rose, etc).
However, I have been able to complete a few of the team leaders cards, and the Mariners version was just completed with two different TTM successes in the last few months, Phil Regan and Bob Kearney.  I had already gotten Matt Young on the card a few years ago, then when Regan was signing recently, I sent off to him.  Kearney was last, and now the card is complete.  It feels good to get these done and put away in the album for good.
Posted by William Regenthal at 11:33 PM

I thought it would be pretty darn close to impossible to get those Team Leaders cards completed, so that's awesome you got one! And there's a guy who has the whole set?!?!?!?!