A Long Awaited Trade With Sam 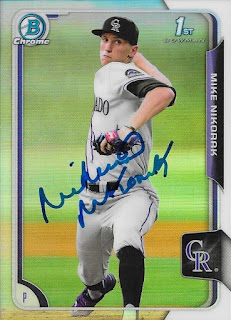 What can I say about Sam?  I've known him for a long time.  A very long time, really.  I finally got to meet him in person back in 2018 when Chris and I went to Texas, and that was a really nice time.  We used to talk every day, now I may hear from him once a year.  Maybe.  It's a common thing, really.  You become friends with someone, get pretty close, then start drifting apart, until you finally realize that you hardly talk at all.  Or you get a text message from them, and realize their number isn't even in your phone anymore.
I liked Sam so much, I took all of the photos he had sent me over time that had him with baseball players, and I made him a shutterfly book that he could share, and maybe get signed by said players.  It took a lot of work, but I felt like it would be a nice thing to do.  I hope he liked it.
I got a message out of the blue from Sam a few months ago, asking me if I would trade him an extra DL Hall autograph that I had gotten IP for some cards that Sam had gotten himself over the years.  I wasn't sure what all he would send, but it made for a nice "blind trade".  Those can be fun, really.
I thought I would maybe get one auto back, but Sam, in fact, sent 4.  None of which I had, which was even better!  The above Mike Nikorak 2015 Bowman refractor is especially nice, since I missed out on him when I saw Asheville a couple years ago (it's ok, I got Riley Pint on EVERYTHING I had).

Sam also included these three cards.  I had sent to DJ Peters TTM, but it got returned to sender, so that helps.  I also was glad to get a Sean Murphy auto back, since I tried to 50/50 on him, but the person missed him.  I sent TTM to Logan Allen, and those cards are out somewhere, hopefully coming back sometime.

So, it was nice to hear from Sam, finally.  I don't hold out any expectation that more trades are in our future, but I do wish him the best.  I hope his knee heals, and he can continue to pitch in college and realize his dream.  He has all of these players he met who he holds in high regard, and I know he aspires to achieve success like they have.

Thanks for the deal, Sam.  Hope to hear from you soon.

Posted by William Regenthal at 10:18 PM