Another Hall of Famer on Mom's Ball - Lefty Gomez 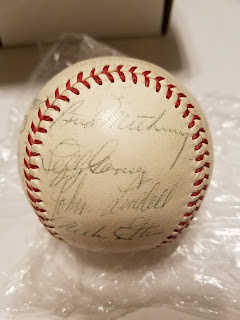 Gomez's numbers don't quite stack up to some other starting pitchers in the Hall.  He may be benefitting from being on the Yankees.  There is a pitcher not in the Hall of Fame who appeared in 17 seasons (albeit one game in one of those seasons) who has a similar won/loss record (177-135), more strike outs (1,534) and an almost comparable ERA (3.39).  The other pitcher won 20 games only once, however, and also had only one World Series win.  Anyway, Gomez is in, and you can't take that away from him.

Gomez is my 150th Hall of Famer on a baseball.  There's another nice round number.

When I can get caught up with some other posts, I will come back to this baseball and feature the other guys on the ball.  That will be a lot of fun, and should happen sometime in the not-too-distant future.

Again, thanks for the awesome ball, Mom!