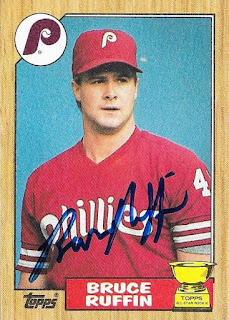 Seeing this card get signed was actually a really great thing for me.  I had Bruce Ruffin cards put aside in my TTM box for a long time (probably dating back to 2016 when I first started sending cards).  I don't know why I had put him in there; Ruffin hasn't signed TTM in a long time.  Sometimes that happens.  I inexplicably pull a player after thinking they sign, then when I go to send to them, I see that they haven't signed their mail in 15 years.

So, I saw that a private signing for Ruffin was happening, and I finally got to send in one of the 87s that had taken up space in my box for so long.

Posted by William Regenthal at 6:47 PM