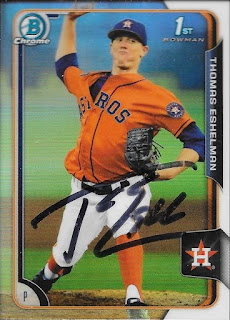 I spent a lot of time during the suspension of baseball to try to send to the home addresses of some players who I had lots of cards of.  The Orioles crapped on their fans earlier this year by canning Fan Fest, so I have a bunch of cards of Orioles that I wasn't able to get signed.  In hindsight, it probably was a good idea that they canceled Fan Fest, but at the time it sucked.  So, I sent off to a bunch of players, and got a few successes.  This one from Thomas Eshelman helped me get two 2015 Bowmans out of my box. 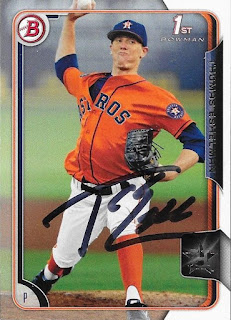 Eshelman signed a 2015 Bowman and a 2015 Bowman Chrome refractor.  Both cards turned out great.  I'm not too big a fan of 15 Bowman because of the foil lettering on the cards.  They're hard to read, so I have to flip them over and read the backs as I am poring through the stacks in my boxes.

These two cards filled up my 12th full album of signed baseball cards.  This doesn't include my signed 1987 set, which has its own album.
Posted by William Regenthal at 8:56 PM