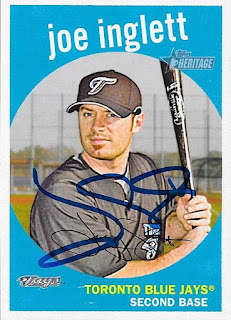 I have been able to find less and less older Topps Heritage cards, for some reason.  So, when I do have one I can get signed, it usually turns out pretty well.  When the player I mail to sends me the card on his own, well, I'll take that ads a win, as well.  The above card I was able to get signed by Joe Inglett via TTM really looks sharp.  He had swapped out the three cards I sent for the above 2008 Topps Heritage, which showcases the 1959 design. 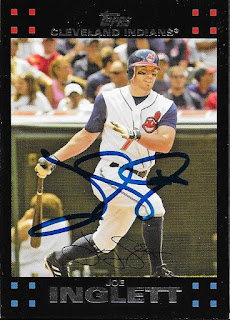 Inglett also signed a 2007 Topps for me, and it turned out nicely, as well.  I don't remember which cards I sent, but I'm happy to have gotten these in return.  I'm sure someone else got mine, and I hope they like them.

Posted by William Regenthal at 7:25 PM